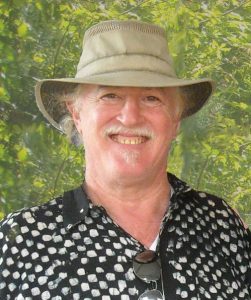 If you Google the term “raw food,” the top result is Rawfoodlife.com. The site has held the first place ranking for roughly 10 years. If Fairfield CoLab member Bob Ross has anything to say about it, Rawfoodlife.comwill maintain that spot for the next 10.

Bob founded Rawfoodlife.com 18 years ago, and he’s been developing it ever since. His goal is to help people enhance their consciousness through raw food diets, and Fairfield is the right market for his business. The Transcendental Meditation Movement attracts many people who are interested in higher consciousness and holistic living, making raw food a natural path for some of them. Bob notes that people explore raw food options for different reasons–some believe it will make them healthier while others are simply interested in losing weight. Bob himself was 100 percent raw for two to three years while at the Optimum Health Institute, he recalls.

“I had a much higher, purer kind of consciousness,” he says. Bob acknowledges that a 100 percent raw diet can be challenging to maintain, especially financially. But he believes that even a 75 percent raw diet will yield benefits. He says that raw food diets are similar to veganism, minus the political aspect. Vegans can also eat cooked products and processed foods as long as they don’t contain animal products.

Although Rawfoodlife.com has mostly been non-commercial up to this point, Bob is preparing to launch a raw food catalog to his readership. On any given afternoon, you’ll find him at his CoLab desk, tweaking and perfecting the site. He’s transitioning it from an old HTML design to a new WordPress format. The revamped site will be better equipped to meet the needs of his growing online community.

Bob says that at its peak, Rawfoodlife.com drew 2,000-3,000 hits a day. He’s working toward getting back to that number and serving the raw enthusiasts who flock to his Facebook page. Bob attributes the recent spike in interest in raw food to social media. Because people are constantly posting photos of their food–and because many are becoming increasingly health conscious–there’s more enthusiasm around the raw diet.

“Every week there is a new way to engage with it,” he says. Social media has allowed people from around the world to exchange ideas about raw food, further expanding the movement.

Bob was the CoLab’s first member when it officially opened in 2015. His cousin, Lee Ross, was heavily involved in the CoLab’s early development and he told Bob about the concept. Bob set up his desk before construction had even finished.

“He told me what he was doing and I said sign me up,” he says.

The CoLab seemed the perfect place to revamp his site after Google changed its search algorithms and forced online businesses to rethink their strategies. Bob was looking for a place where he could not only work, but network and build new relationships.

“The interesting thing is, before I even knew what I was signing up for, I intuitively knew that I needed to be here,” Bob says of his decision to join the CoLab. “We have friendships with all kinds of people we didn’t know before. We can bounce around ideas with each other.”
That’s how Bob first connected with fellow CoLabber and entrepreneur Jeffrey Smith, who runs SEO Design Solutions from his CoLab office. Smith’s SEO expertise has come in handy as Bob ramps up Rawfoodlife.com. Soon after meeting Jeffrey, Bob realized that he needed someone like that on his team.

“It’s part of my growth as a human being, part of my process,” Bob says. He’s considered letting Jeffrey take over the reigns of Rawfoodlife.com, though he hasn’t ceded control yet. But he is looking forward to working with Jeffrey more. The Internet may be in a state of constant change, Bob says, but Jeffrey is always ahead of the curve.

He has thought about letting Jeffrey Smith take over his website. According to Bob, even though the internet is in a constant state of change, Jeffrey is so far ahead of the curve. He looks forward to working with Jeffrey more. Bob also works regularly with writer Matt Monarch, who owns the biggest commercial raw food site.

Bob’s goal is to turn Rawfoodlife.com into something bigger than himself. He wants the site grow even when he’s ready to move on from it and hopes to attract a range of new partners for the business.

Want to join the discussion?
Feel free to contribute!